Frederiksberg – also known as The Green Village of Copenhagen – is an independent district with its own architecture and neighbourhoods with their special buildings and history. In the area, you will find architecture dating from 1600 to the present day.
Pictured here are see some of the district’s historic and distinctive buildings. 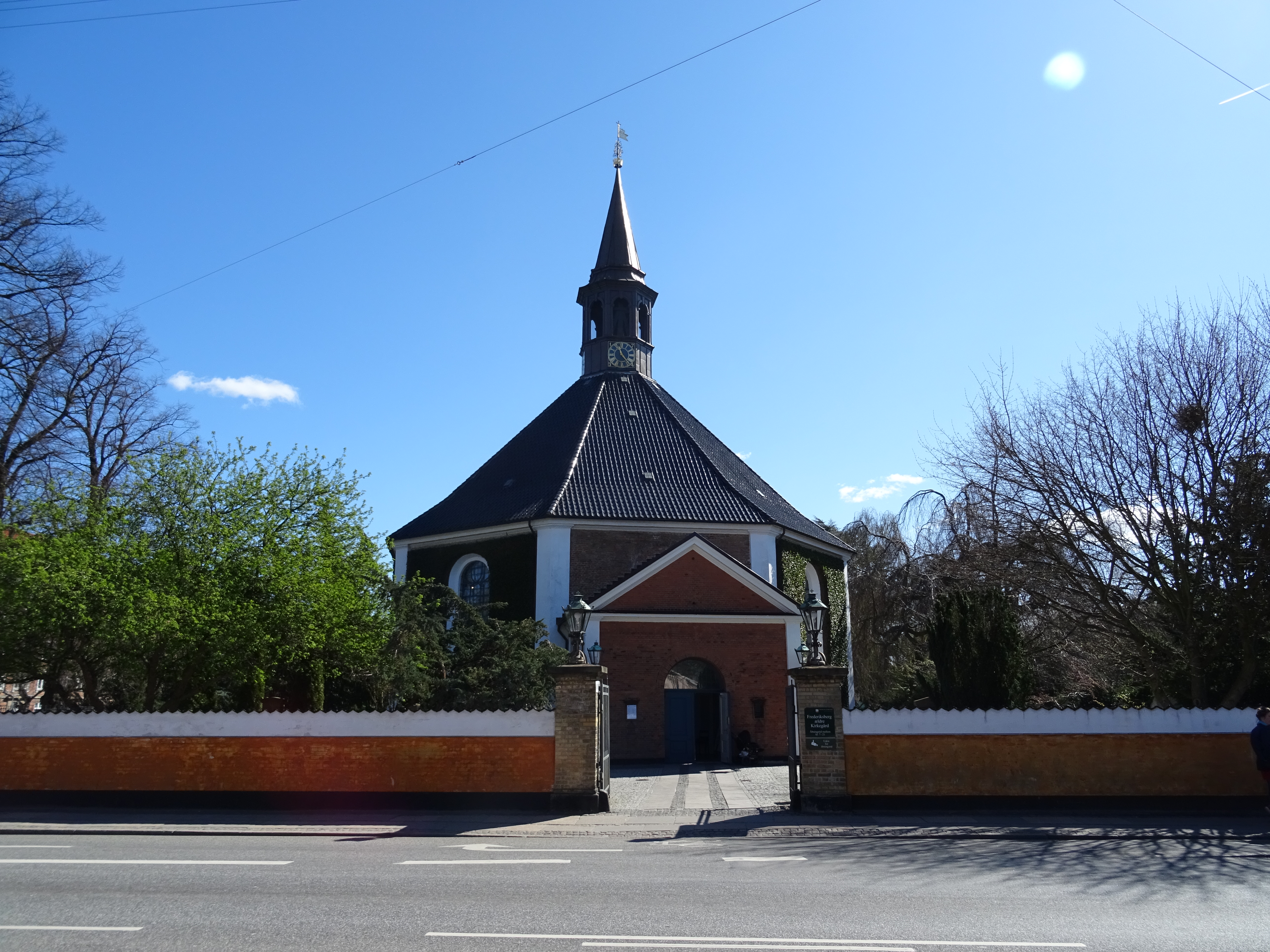 Frederiksberg Church is located on Pile Allé and comes under Frederiksberg Parish. The church was built to drawings by the Dutch architect Felix Dusart. He carried out the work for the Protestant congregation of Ny-Hollænderbyen, which was built in the period from 1732–1734. The church was consecrated on 6 January 1734 by the Bishop of Zealand, Christen Worm. The consecration was attended by King Christian VI and the Crown Prince, the later King Frederik V.

Frederiksberg Church is a very interesting building, as there are only three similar churches with this architecture. It was built as an octagonal church with a pyramidal roof and spire. The roof was originally covered in black glazed tiles, but this was changed to slate in 1876. The nave was built in an octagonal shape, with three galleries supported by eight columns. The altar is located to the east. The beautiful altar painting was painted by the Golden Age painter Christoffer Wilhelm Eckersberg and depicts the “Night World”. The painting was hung in 1841.

Adjacent to the church is Frederiksberg Ældre Kirkegård cemetery which dates back to 1732. Many famous people are buried here. From May 2016, the church is undergoing major restoration and refurbishment. During this work, the lower gallery will be removed, which should provide better light and acoustics. The church will be closed until mid-2017. 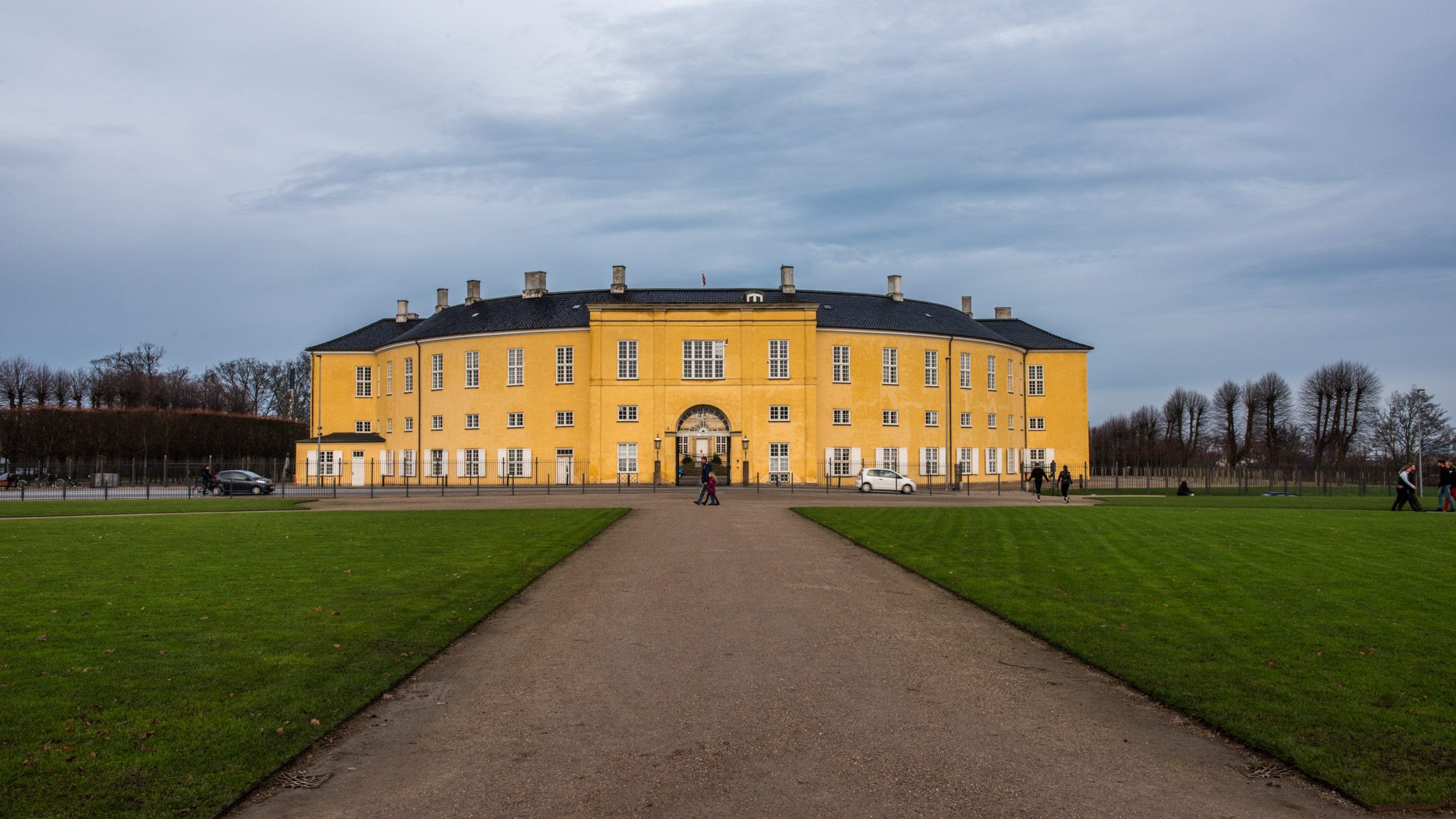 When he was Crown Prince, Frederik IV went on a grand tour of Europe. The tour, from 1692–1693, included a visit to Italy and, inspired by the Italian Baroque villas, he drew the first sketches for the Palace. The construction started in 1699, a few months before his father, King Christian V, died and Frederik himself became king. The first Palace was built in the Dutch Baroque style, and soon became too small for the royal family. Frederik IV moved into the Palace on 25 September 1704, and moved out again on 15 September 1706, so the extension of the Palace could get under way.

The Palace was extended from 1707–1709, under the supervision of architect Johan Conrad Ernst, among others. Another floor was added, which, among other things, housed a grand ballroom, as well as two transverse wings containing rooms and a chapel. During the reign of King Christian VI in 1732–1738, the architect Lauritz de Thurah built a curved building around the courtyard in continuation of the side wings. The royal family used the Palace as a permanent residence from 1731–1740, while the first Christiansborg Palace was being built.

Frederiksberg Palace took on its present appearance during a minor renovation in 1828–1829, conducted by architect Jørgen Hansen Koch for King Frederik VI. The royal family used the Palace as its summer residence, helping to make the Palace and its gardens so famous. A statue of the king stands at the main entrance to the gardens on Frederiksberg Runddel, welcoming the public. His widow, Queen Marie Sophie Frederikke, who died in 1852, was the last royal resident at the Palace. The Palace then remained relatively empty, although the Danish Order of Freemasons borrowed the main palace to use as its headquarters from 1854 to 1863. During the Schleswig Wars in 1864, the Palace was converted into an eye hospital, which, however, ended in 1865 when King Christian IX signed a royal decree, assigning the Palace to the War Department with aim of handing it over to the Army Cadet School and later the Royal Danish Military Academy. This took place in 1869 and the Royal Danish Military Academy has its headquarters in the Palace buildings to the day. Major restorations were carried out from 1927–1932, 1975–1977, 1994–1996 and 2010–2015. The Palace and the Military Academy form the setting for one of the finest management education programmes in Europe, which is part Frederiksberg Campus. In addition, the Palace is also the setting for numerous cultural activities, including guided tours. Several different types of guided tours are available at the Palace. For further information, please visit Frederiksberg Palace. A special guided tour rounding off with music to accompany the story (Barokhalløj på Frederiksberg Slot) can be found here. 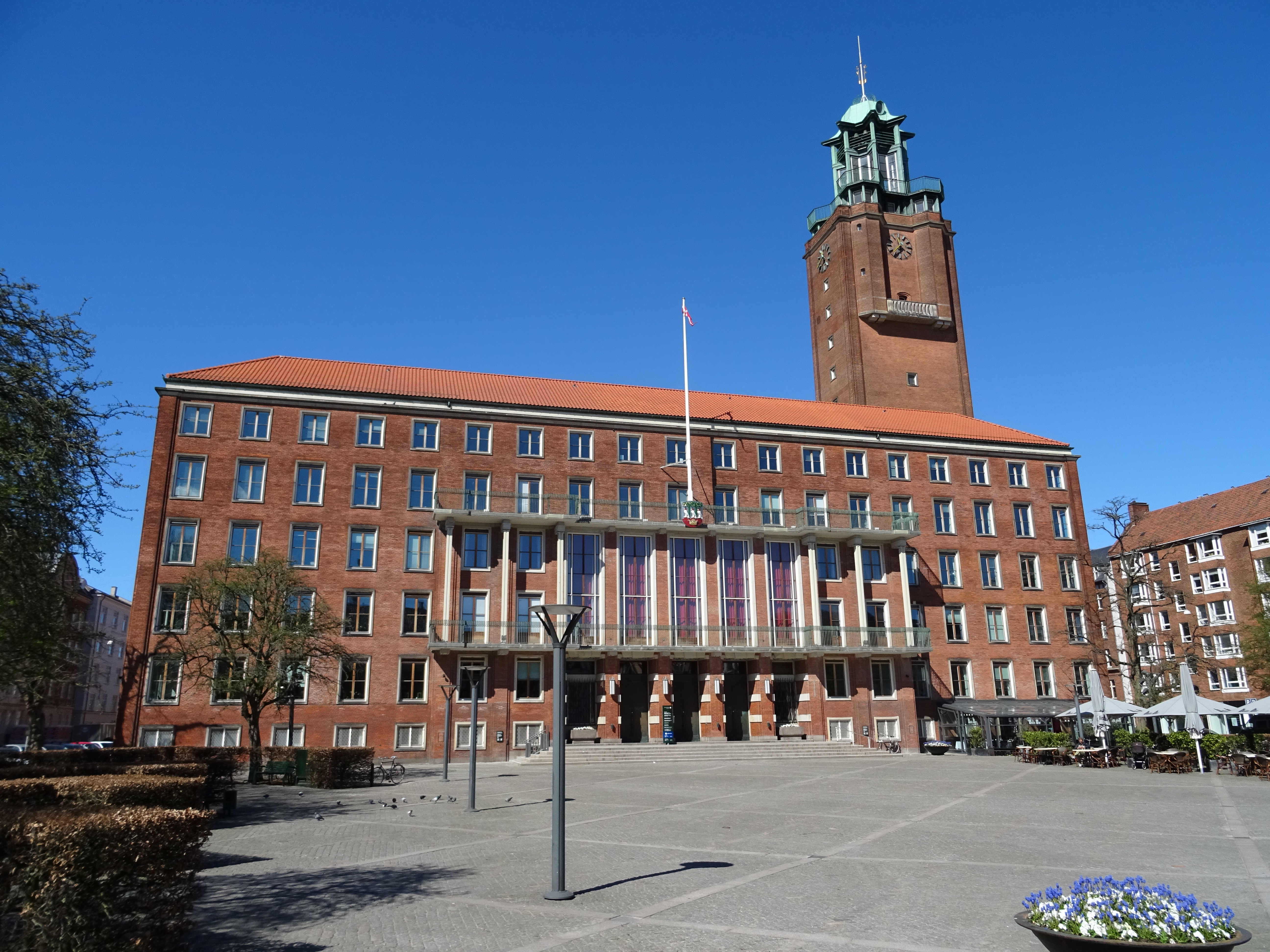 Frederiksberg Town Hall was built from 1942–53. The first architect was Henning Hansen. He died in 1945, and the architects Carl H. Nimb and Helge Holm took over the task of completing the building. In addition to administrative offices, the Town Hall houses a town hall auditorium, a grand ceremonial hall, and the City Archives in the basement, which are open to the public.
The Town Hall is 60 m wide and 120 m long.

The Town Hall tower, which rises 60 metres above street level, offers an outstanding view of Frederiksberg, Copenhagen and the Øresund Bridge.
In the basement of the Town Hall, there is also a command centre. The command centre was established during the Cold War in the mid-1950s and remained open until 1999. The command centre shows how the emergency services, including the Police and fire inspectors, worked to coordinate civil protection in the event of a disaster.

Open: There is a guided tour on the first Saturday of every month at 13.00.
Guided tours: Start in front of the main entrance of the Town Hall. Special guided tour by appointment. Please contact Frederiksberg Kommune on tel. +45 3821 2126 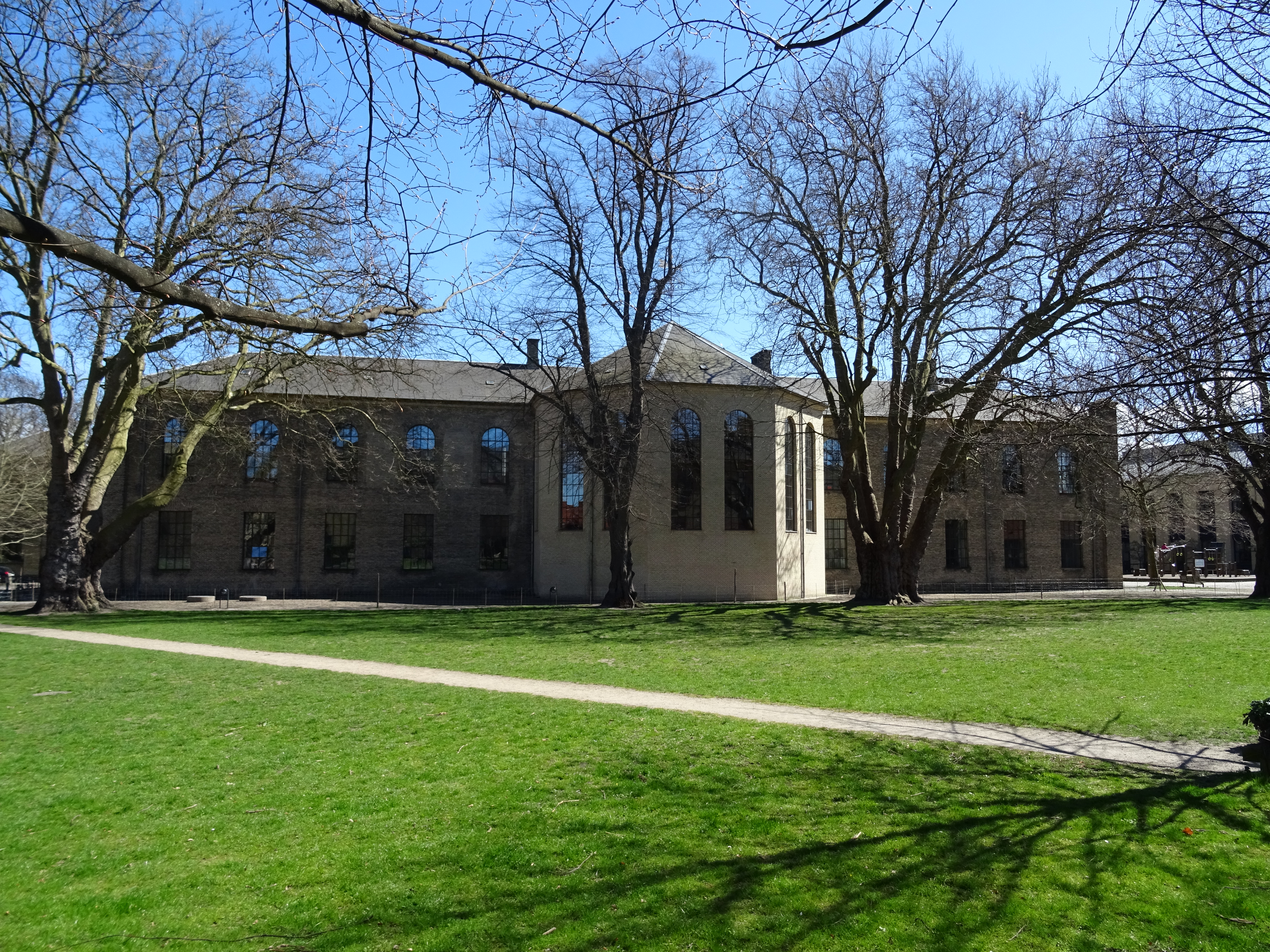 The original building as it looked around 100 years ago. The faculty’s main building was built in 1856–58 by Danish architect Michael Gottlieb Birckner Bindesbøll, and consisted of the three-winged facility with pergola. The fourth and final wing on Bülowsvej was added by architect Johannes Emil Gnudtzmann in 1895, when the cobbled courtyards between the wings were also laid.
In 1858, the Royal Veterinary and Agricultural University (KVL) opened its doors for the first time, and by royal command, seven tenured teachers and 192 students set about “raising farming in Denmark to a higher level”. Over the next 150 years, the Agricultural University continued to grow, and in 2008, there were 1,800 permanent employees and 3,500 students.

The main building houses one of Europe’s most beautifully decorated auditoriums, which belongs to the part of the building designed by architect Michael Gottlieb Birckner Bindesbøll.

There is access to the beautiful courtyard with the pergola via the main entrance from Bülowsvej. Here, you can enjoy the buildings’ solid style and get a sense of the university environment as it was more than a century ago. There is public access to most of the university area, and behind the main building, you will find several old buildings. The new library is also worth a visit. The entrance to this was decorated by the Danish artist and textile designer Linn Utzon. Go inside simply to see a modern university library from within. Contemporary, not to mention highly functional, successful and oozing atmosphere.

The beautiful auditorium can be visited on special guided tours, which can be found under guided tours.

The Danish Deaconess Foundation was established in Frederiksberg. It happened at the behest of Princess (later Queen) Louise, who was married to King Christian IX. It was built in 1863. The first hospital was a building on Smallegade. It also housed residences for the Deaconess Sisters. Princess Louise had urged Louise Conring to embark on a study trip to the deaconess houses in Sweden, where the order had been active for ten years, and to Germany where pastor Theodor Fliedner had established the first Deaconess house in Kaiserswerth in 1836. Back in Denmark, Conring became the first deaconess and warden. In 1876, the Foundation moved into the first part of the current building complex on Peter Bangs Vej.
The Deaconess Foundation’s hospital was closed in 1984.